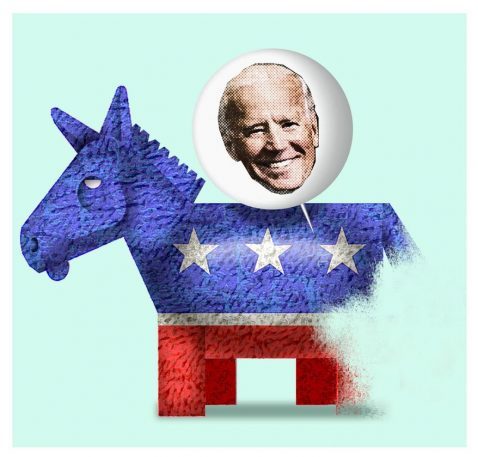 “When fascism comes to America it will not be in brown and black shirts. It will not be with jack-boots. It will be Nike sneakers and Smiley shirts.” — George Carlin, Real Time with Bill Mayer, HBO, Sept. 9, 2005

“It is difficult now, in the light of their massive crimes and failures, to remember that both fascism and communism were, in their time, utopian visions and the bearers of great hopes.” — Jonah Goldberg, Liberal Fascism

During the Democratic debates Joe Biden committed to a female running mate. Recently he committed to nominating a woman of color to the Supreme Court.

Biden says he wants his administration “to look like America”…

Now he is under pressure from female African American Democrats to expel not just men, but people of European descent from consideration for the Vice-Presidency.

Female African American members of the Democratic party are signing a letter – an online petition, really – urging Biden to choose a woman of color as his running mate.

Imagine a job announcement or housing advertisement limiting applicants to a specific gender or race. We find that kind of discrimination so abhorrent that we pass laws against it.

This kind of exclusion and prejudice is at odds with the principles of every liberal democracy in the world. But it is alive and well in Biden’s campaign and the Democratic party.

To justify the exclusion of people of European extraction, minorities must be their perpetual victims. That is disrespectful to say the least. Human beings have agency – they can act on the world and act upon themselves. Perpetual victimhood robs people of agency and personal power. It treats them as if they are inherently helpless and powerless.

It strips them of human dignity.

But that also means that people of European extraction must be perpetual victimizers. They are irredeemably morally corrupt. That justifies excluding people of European descent from the principle of equality. It makes it acceptable to single them out for their skin color and exclude them from consideration for political office.

This is very troubling…

It’s a stunning display of bigotry, racism and gender discrimination that has no place in America. This will not end well for the Democratic party or for the nation if Biden follows through on his commitments.

The Declaration of Independence states the principles upon which our nation rests, specifically equality…

“We hold these truths to be self-evident, that all men are created equal, that they are endowed by their Creator with certain unalienable Rights…”

In the very first line of the Gettysburg Address Abraham Lincoln cites equality as one of the founding principles of The United States. In the next he says the Civil War is a test of whether a nation founded on principles of liberal democracy can survive.

Slavery was the most compelling violation of those principles, a concrete example of the evils that liberal democracy prevents. But the Civil War wasn’t just about ending slavery; it was about expanding the principle of equality under the law to individuals.

Not just slaves or African Americans, but to every citizen of the United States.

Human rights do not disappear overnight. Well-meaning people violate them with the best of intentions, and over time they erode until they no longer exist.

For example, a sincere desire to end poverty motivated Margaret Sanger’s campaign for birth control in the early 20th century. She worked tirelessly to bring contraceptives to poor communities and encourage their use.

That was a noble goal, but it led to the concept of eugenics – engineering a just society through selective breeding, forced sterilization of “undesirables” and a quest for “racial purity” in this country and others.

It’s important to remember that the government officials, academic researchers and prominent charitable institutions endorsed and promoted the American eugenics movement of the 1920’s and 30’s. This gave legitimacy to the idea and attracted attention from Europe.

There were no brown shirts or jack boots. At least not at first…

In the 1920’a and 30’s Adolph Hitler followed the eugenics movement in the United States, ordering books from eugenics organizations and even writing letters praising their work.

Sanger lost sight of our values of individual self-determination and equality. Over the decades no one questioned the growing conflict of eugenics with the ideals of liberal democracy. That failure contributed to the acceptance of the Nazi party in Germany and the horrors of World War Two.

That is why it is so important to understand the principles of liberal democracy and speak out when we see them compromised.

Now the Biden campaign and the Democratic party are starting down the slippery slope of racism and prejudice. Their intentions might be noble, but their logic is flawed. Creating a political cadre of people who “look like” those they represent does not guarantee liberal democracy.

We are facing complex interlocking problems:

A vaccine for COVID-19 will not come any time soon. We can expect sporadic outbreaks in cities and regions even if we can bring infections under control nationally.

A large portion of the newly unemployed worked in service and retail jobs – industries that are not coming back. Very soon a huge number of people will have no means to support themselves. Expect a large and permanent expansion of the gig economy, and with it a decline in the standard of living.

Related to that is the possibility of another mortgage collapse like the one following the 2008 Great Recession. Congress passed legislation delaying foreclosures and evictions, but that is not a permanent solution.

We are only a few months into the COVID-19 crisis but have already increased our national debt to dangerous levels. Natural disasters sure to come later this year will present hard choices about incurring more debt or giving aid to devastated communities.

We need government officials possessing something more than a superficial resemblance to their constituents racial or sexual properties. We need people chosen because of their political skills, breath of knowledge, ability and intellect, not on irrelevant features of their appearance.

To do otherwise is to undermine the best of our nation.